SAP HANA is an in-memory platform for processing high volumes of operational and transactional data in real-time. SAP HANA speed up the process by compressing the data, by storing column and row based data in the memory, RAM sits next to the CPU, and one CPU can have multiple cores and one SAP HANA box can have more than one CPU, which makes SAP HANA 10000 times faster.

There are many options available to migrate to SAP HANA. Common methods to migrate SAP HANA can be done either using classical method or SAP DMO methodology. SAP DMO is latest methodology from SAP which is used for migration of SAP ABAP system to SAP HANA. SAP recommends using SAP DMO tool to migrate SAP system (SAP BW or SAP Business Suites) to SAP HANA. I hope the content of the blog would be beneficial to all its readers and would accomplish its intent nature by providing you all the important information about SAP DMO.

3) One – step procedure or in place upgrade and migration with DMO (using SUM) – In this option, in place combined upgrade and database migration is done in one step. 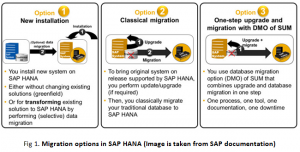 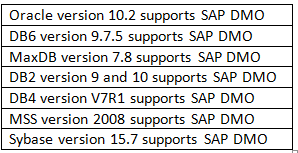 DMO Technique – How does in-place upgrade and migration works

SAP DMO is executed from the host where SAP PAS (primary application server earlier known as central instance).  To use the DMO, you start the Software update Manager not as described in SUM Guide but by means of the SAP Host Agent and the SAP Host Agent has been updated to the latest version.

Step0. Browser Request -> SUM The DMO procedure is started from within a browser, sending an HTTP request to the SAP Host Agent, as shown in below screen. 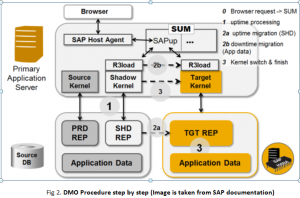 To start the Software Update Manager via the SAP Host Agent, you open a browser window and enter the following internet address in the address bar: https://<host>:1129/lmsl/sumabap/<SID>/doc/gui

Where <SID> has to be replaced with the System-ID, 1129 is the https port of the SAP Host Agent, lmsl is the abbreviation for Lifecycle Management Software Logistics, Use http instead of https if the SSL is not configured and use port 1128 instead of 1129: http://<hostname>:1128/lmsl/sumabap/<SID>/doc/gui

The SAP Host Agent requests authorization from the browser, this user is used to start the SUM. As the DMO procedure is only working on AS ABAP based systems (for which the SAPup is the relevant SUM part), the SAPup is started. 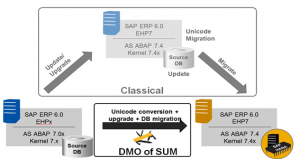 SAP Notes reference for the DMO